An hour away from Warsaw where everything about Chopin takes up a whole day’s worth of sightseeing, is his birthplace, Zelazowa Wola. Although Chopin’s family moved him out to Warsaw a year after birth, he frequented the estate turned tourist site with his family during the summer. (Also listed in Schultz’s 1,000 places to see before you die)

We hit the two-lane highway from Warsaw to Sochaczew and turned right into Zelazowa. Jampacked during the week, it’s best to go in the weekend and pay a tribute to the world’s greatest composer.

Beautifully laid out, the botanical garden surrounds the house that goes back to the 16th century and holds significant non-tangible memories of the Romantic era composer. Everything else is a reproduction of the originals at museums or palaces in Warsaw if not looted during World War II. Sadly, we visited off peak, but open-air concerts by Polish and International artists are held from the first Sunday in May to the last one in September. Why so awesome? There are music speakers all over the garden that exposes Chopin’s genius talent. Whether it’s a Mazurka, Nocturne, Ballade, Waltz or his other virtuosic works it definitely makes the trip down worthwhile. 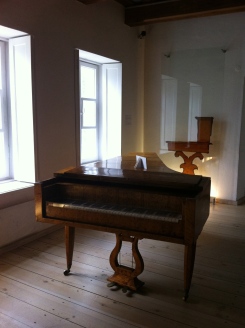