You visit Paris once.

Once to rush around the major landmarks like the “unconventional” tourist, and then for fashionably irresistible reasons. Although I’d been once before, I was never really excited about the notion of Paris and its exquisiteness, especially on the most important Christian Orthodox weekend, Easter Monday that brought the city to a halt. With barely anything else to do but wait for the evening to attend a wedding, I did what I enjoy doing the most. Indulge in the architectural oo la la’s despite the dead vibe.

And so I did. Admired it all. From Plaza Republique, a neighborhood a little off the circuit, I wandered south towards the banks of La Seine along several rues, passages and monuments while post modern architecture juxtaposed against the medieval at Les Halles and Centre George Pompidou. I crossed over Pont Royal bridge and glanced far away at Gustav Eiffel’s iron lady. Entertained by street musicians and performers, I totally fell in love with Boulevard St. Germain and more so under the cloudy skies . I crossed over Pont Neuf bridge and embraced the relics that survived through various eras and wars. And then I saw it: Paris’s well-deserved stature as “culture capital of the world”.

More electrifying at dusk as the city lit up to dignify its character that evoked thousands of cultural transformations.

An architect’s paradise. An art lover’s den. A designer’s sanctuary. A sucker for romance?

Spoiler: Your soul mate is not waiting for you with flowers in Paris. 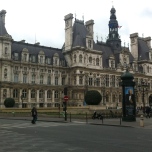 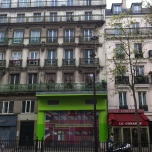