After a 24 hour flight and 14 hours in Lima, we flew to Arequipa the next morning. Situated at 2,380 above sea level, the white city is the gateway to other destinations in Peru from where we started our road trip to Puno and then hopped on the Andean Explorer to Cuzco.

Unless you pop into Convento de Santa Catalina or San Camilo Maket, the entire city is built with white stones (sillar) produced by now extinct Chachani volcano. Chachani, along with El Misty and Pichupichu are the three volcanos that stare icily down at the city and destroyed it in 1868. They can be seen from just about anywhere.

As we walked down to Plaza De Armas, the restored historic center, we were drawn by beautiful detailed arches, low rise Spanish colonial buildings and catholic churches that exposed their historic relevance. We headed to Convento de Santa Catalina, one of the largest convents in South America that housed 450 nuns once upon a history from upper class families. A city within a city, it could not escape the eyes of the three volcanos. For more info because it’s monumental: http://www.santacatalina.org.pe/

Thirty minutes into our tour guide’s highly elaborate history lesson as we ambled around the cloisters, we were totally distracted by the color of the walls, exotic plants, exquisite doors and…. incipient hunger pangs.

I couldn’t help but ask for forgiveness for our hasty exit. The market shut at 5pm, we had an early departure to Chivay the next morning SO we didn’t want to miss the characterful market! Although three blocks away, we didn’t waste time with my below average map skills kicking up a fuss , so we cut a deal with a driver who offered to drive us to the market. Before we questioned his trustworthiness, we were there right on time, 30 minutes before closing and Oh Boy… let the pictures speak for itself. 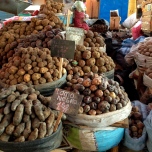 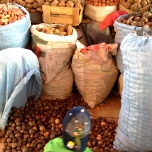 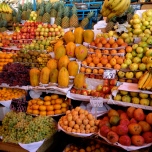 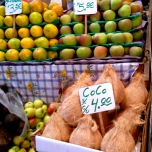 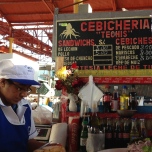 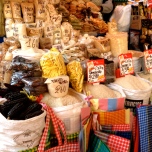 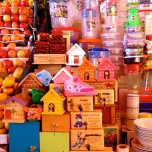