As much as I would like to deny it, we fell for the Gozo tourist trap. Bright Gozo day trip flyers were plastered all over San Gilan (St Julian’s), the most happening district in Malta, adding a burst of colors to pastel washed buildings redeveloped into restaurants, clubs, apartments and shops. Being a sucker for colors, I couldn’t help but pause, be fooled and then some.

A ferry-load of tourists 25 minutes later, we reached Gozo. Fortunately, the ferry’s arrival and departure timings coincided with hop on/off tour buses at the Mgarr port. Associated to Napoleon, Greek mythology and crazily enough GIANTS that built the oldest freestanding temples (more on such “megalithia” below), Gozo takes pride in its spectacular landmark, the Azure window. So, we hopped on the bus with a cranky bus driver who languidly drove us around the island. With a map in hand, we were totally excited to see five of the best sights…initially. The deeper we drove into the island, the more our excitement abated. It didn’t matter how many people got on the bus in their swimwear. 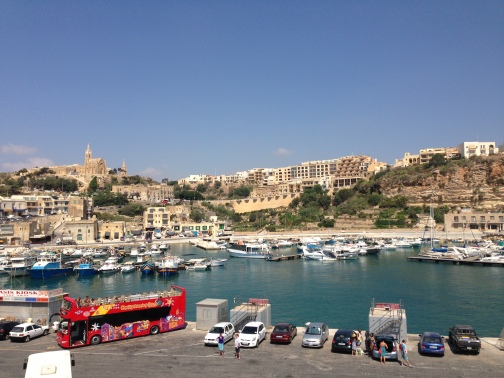 We drove through bedrock villages and buildings adorned with “for sale signs” while we were desperate to see living things. It felt like we were on some kind of bone collecting archeological mission on a retired bus aggressively keeping us tuned in to the sound of its engine. The semi-desert rocky landscape inland was an uplifting add on to our fictional venture. Victoria, allegedly the capital and city center once dominated by the Knights of St Paul’s, was survived by monuments reconstructed during various colonies that coincided with Malta’s. Uncongested, pale and balconies devoid of hanging laundry, we saw a handful of wandering tourists, road works and decorations for the feast of Santa Maria on the 15th of August. The island lacked the color of life. 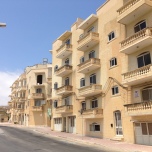 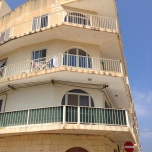 We traipsed around Dwejra Bay, (worth getting off the bus for), until we found a “uniquely” spectacular view of the Azure Window. The myth is that these rocky arches answer your prayers or something. In desperation, I made one. Who wanted to WAIT ANOTHER 45 MINUTES for missing the 3pm ferry? I shall throw thyself in the name of the ferry. Actually, it was really windy. I almost got thrown off. Anyway,  after a few shots of the beautiful grotto or rather people enjoying themselves, we waited for the bus. For a damn long time.

Malta goes back to 5,200 B.C. If you wanna impress a hedge fund manager with your knowledge of history then this site will do the work. Forget wiki and click on here www.visitmalta.com. It’s all you need to know. But, why skip basking under the sun and splashing waves in the azureness of the Mediterranean to trot around a bunch of megalithic stone structures that once stood as temples in the BC? And so I traded the sun for pre-history and I’m sorry UNESCO, it wasn’t worth the trade, although the chalk-like background for a middling fashion shoot was kinda okay. Sometimes I wonder what the guys at UNESCO really want visitors who are archeology brain dead to feel. Reward? or patience? I’m usually tolerant but when they’re going all JENGA on you, I’d rather be on the beach.

P.S. Megalithic temples are found in Gozo and Malta. H for Hurrrraah!