Remember back in the day when we head bobbed to and belted out TLC’s ‘Waterfalls’ like a bunch of phonies from the 90s who thought ‘chasing waterfalls…waaa?…like….not….in the literal sense’?? Fast forward to today’s post, somewhere in Africa, we went out of the way to ‘Chase’ waterfalls – without a clue. Fickle weather? leather shoes? muddy trails? boat ride? WANNA KNOW WHAT ELSE?

In the fickle season of rainfall, we flew out of Addis early in the morning and landed in Bahir Dar on a beautiful sunny day. After a series of confusing events like getting on the wrong bus, our sleepy tour guide with bloodshot eyes turned up. His excuse? ‘I have been waiting too’. In the not-so-huge-airport.

Anyway, we checked-in Summerland Hotel, grotesque as it gets and one of the “recommended hotels” in the city that boasted a charming view of Lake Tana, the second biggest lake in Africa. Only after you phase out the busy street right outside the front lobby and the huge trees blocking the view. Forget the romantic patio over the lake. It was the kind of building you draw to pass art class for the sake of it designed in motel like decor and complemented by the stench of whatever it was that was being fried in the kitchen. Not to mention the stuffy welcome. Pun intended.

From the shores of Lake Tana, we took a one hour boat ride on Ethiopia’s largest lake and the source of the Nile to Zege Peninsula, one of the 37 islands on the lake. It’s home to two sacred monasteries from the 16th and 17th centuries, tucked among thatched hatches and lush greenery, jazzed up by monkeys and singing birds. From the jetty, we set out to the neglected Bet Maryam monastery, a 20 minutes walk, and were mesmerized by its unique circular shape and bright biblical paintings that intricately illustrated stories from the bible. Definitely worth the crash course in Ethiopia’s cultural treasures and orthodoxy and the fresh air.

On the way back to the jetty, we heard faint roars of thunder. Our guide assured us it was nothing and we would make it right on time to 1) escape the rain 2) see the source of the Nile 3) drive to the Falls because it would have already been dry by then.  We believed him like he was the great predictor. In the comfort of his calm composure, the lake drastically changed color and the skies were slowly turning grey. 30 minutes into the motor boat ride, it started to pour. And pour. And pour. In response to our misfortune, we played musical chairs to stay dry under the only part of the polyester cover that was not leaking. Finally, we made it to the freshly watered shore, took a one hour lunch break and prepared for our waterfall chasing quest.

Shores of Lake Tana, a drive away from summerland 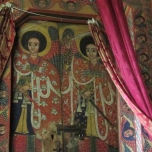 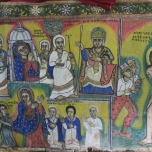 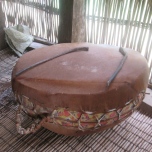 Before we left to Ethiopia, I read Tripadvisor reviews and a few blogs that described the Blue Nile Falls as one of their most miserable experiences. Such as: ‘two drops, unworthy, they were let down, etc’. But hey? We already paid for the trip. It would have been too late to back out. If it sucked- Big Deal! So I kept it a secret and put on my fashionably retro leather Onisuka Tiger Shoes.

After one heck of bumpy hour long ride into the forest, we made it to the start of our hiking point. HIKE WAAA?  Ohhhh Yes. Nevermind the half hour hike in the light to medium drizzle on the hilly terrain. The challenge was to avoid slipping and getting down and muddy. So we shortened our stride, waded through the mud reeealllly slowly and squirmed through the uphill and downhill stretches. The magnificence of the Blue Nile Falls gradually unveiled underneath energetically puffed out steam clouds. Without sounding too cliche, it was breathtaking. Also known as ‘smoke for fire’ translated from Amhara, it is the primary source of what Egypt is today. When merged with the While Nile in Khartoum, it forms the Egyptian Nile bringing water and fertile soil. It’s called the Blue Nile because it’s brown. How’s that for a geography lesson?

We crossed the suspension bridge over Alata Lake and just when we thought the sludge fest was over, we were in for a bigger treat. Deeper mud, cow pies and imperceptible bursts of frustration and impatience. Whenever we asked ‘ HOW MUCH LONGER?’, the guide’s reply was always ‘FIVE MINUTES’. We skidded, wiggled, and shrieked up to the point mud sucked our shoes off. We couldn’t believe it! Half an hour of muddy torture. We then took a 2 minute water taxi ride to cross the river and cheerfully congratulated each other for completing the arduous journey.

Lo and Behold! We got sucked into even deeper mud meandering through tall marsh grasses for another 15 minutes until we approached a small village in triumph. Triumph shortly switched to FURY when we saw the water taxi (above) parked right outside the lake shore close to the village. It would have saved us the hassle of skiing down a massive stretch of mud, (my friend fell on his butt), and as for our shoes, the fiasco contributed to the village’s GDP. 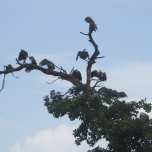 Vultures on the way 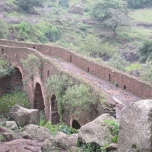 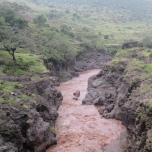 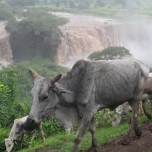 Only later we realized, the shoe cleaning business proliferated all around the country. Unfortunately, my shoes were a wreck and beyond repair.

It would have been a treat to go back to Summerland and relax after an excursion like this one. To the contrary, it was safer being in the outdoors than opening the windows and using hotel basics ie half broken beds, no ventilation, flooded bathrooms, and knotted-dead-mosquito-infested mosquito nets that hung over our beds. Not to discount, intoxicated by the pervasive fried odor from the kitchen that was just as good as burning lavender before sleep.

*** Our tour guides were different on each excursion. Common Factor: The driver, who was great! On this day we met 5 different guides. Except for the guide at the airport, they were all experienced and knowledgeable.