We set out to get through the Argentinian/Chilean border at Futaleufú, Argentina, a whitewater rafting destination, in the early afternoon expecting a quick finish at both borders and make it to Coyhaique, Chile by sun set.

That didn’t go as planned.

After spending almost three hours at border offices in both Argentina and Chile while officers grimaced at our totally unheard of passports and turned our luggage inside out, we finally hit La Carretera Austral, that runs approximately 1,250 kms through sparsely populated parts of Chile’s Patagonia.

We sped away from the Chilean border and drove on Futaleufú’s gravel roads lined by vibrant colors of flowering trees and shrubs. It was early spring and flowers were coming into bloom. We drove along the Futaleufú river that flows among the Andes and crosses several lakes all the way to the Pacific. We dodged innumerous potholes until we hit one before making our way up the windy mountain road. In drizzling rain, we pulled out our luggage and replaced the tire with a spare frequently feeling the ground rumble as giant trucks passed by. The construction work on La Carretera that started in the 70s is still ongoing, so it took a reaaaaaaaaalllly long time to get to Coyhaique because of road works, closures, diversions and last but not least switching gears to turtle pace because we were caught behind a convoy of trucks. Sometimes,we had no choice but to wait for excavators, hanging off the side of mountains, to finish  work. Despite the construction, we were surrounded by beautiful scenery and fresh air as we purposely detoured into National Reserves and Parks in Chile’s Los Lagos region. Word is, it’s Argentinian parallel is not as beautiful.

When the roads were finally clear, we snaked through snow tipped mountains, luscious greenery and valleys of the high Andes as the sun slowly dropped behind the rocks. In absolute darkness lightened by occasional speeding head lights passing by, we headed towards Hotel Los Nires and called it a night. It was too much of long day to go out on a food frenzy at the 70s style motel. So we gave ‘Salmon to the poor thing’ and ‘ suck of spider crab’ a miss. 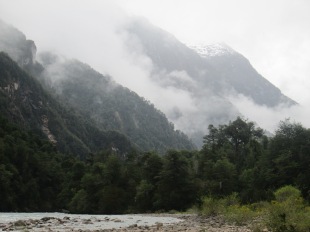 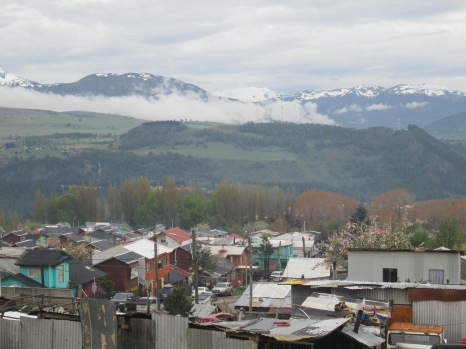