Today was all about Salar de Uyuni. At 3,600m above sea level, the vast expanse was actually Lake Minchin 40,000 years ago . After thousands of years, it naturally metamorphosed into a variety of geological residues, one of them, Salar De Uyuni the LARGEST salt flats in the world almost the size of Qatar, way bigger than Singapore and much smaller than Timbuktu. Obviously, the scientific explanation is too complicated I can’t be bothered to pretend I know it all. No doubt, myths were created to make non-science aficionados feel better about themselves and so it goes: Before the Salar was formed, it was a beautiful young lady/mountain, Tunupa, who’s husband, she was forced to marry, was charmed by someone else. So Tunupa cried her breast milk out which flowed and spread over 4,000 square miles near the crest of the Andes. It is also associated with mother earth and the God of Fertility, Pachamama. The ancient legend still continues among the indigenous guys in the Andes because they believe Pachamama’s generosity warrants their survival since they associate her with agriculture. How do you please Pachamama? Simple. Keep your lady happy and smiling. Good luck keeping your bellies full, guys. Pachamama’s watching you.

We checked out of the Salt Hotel and headed to Colchani, a tiny village close to the flats to visit the Salt Factory and a couple of souvenir stalls. Half hour later, we were charging on Lithium. It was euphoric. The elements of nature at its finest. We were wandering intruders that looked in awe at the grandeur of the universe that remained impassive as visitors went overboard playing around with optical illusions on the salt flats. Because the wet season was almost over, our driver put an extra effort and gave us a special treat. With extensive precaution, he slowly crunched on the salt and drove us close to an entire sphere radiated by the sun’s beautiful energy. It was an enormous mirror that looked up to the sky. Be prepared to get your shoes wet! The puddles are hard to avoid and some of them are deep. 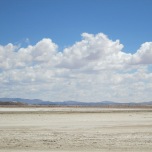 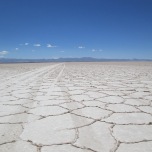 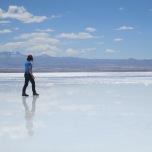 After exploring the flats and surprisingly seeing the flag of my country waving among others, we headed to Incahuasi Island in the middle of the Salar, totally engulfed by protruding cacti. The guys in Science say it supports the fact that the salar was a gigantic lake and the island is an ancient coral reef. Or, for those interested to keep the myth rolling, perhaps the emotional Tunupa is still livid. Yikes!

After our picnic lunch and an hour later, we arrived at the Galaxy and the Devil’s Caves, discovered in 2003 by two locals, to gawk in horror at ghosts and dead bodies. Ha, not really. Here’s the low down. The Galaxy Cave is an interesting geological formation of stalagmites and stalactites. In my imaginative opinion the bizarre formations looked like masks from the movie ‘Scary Movie’ while bougies pointed out ‘coral reefs’ and ‘Tree leaves’. Right next door was the Devil’s cave, a pre-Incan cemetery that goes back to 500 AD. We found human skeletons lying on the floor at our feet.

We walked down the horror house of a hill and drove towards San Pedro de Quemez. We left behind the gleaming white salty stretch. The landscape turned rocky and deserted with scrub vegetation while Sol and the driver began to chew on Coca Leaves. The pungent odor spread rapidly and it was impossible to open the windows  because the wind pushed hard against our jeep and cooked up  giant dust storms. We soon approached San Pedro’s small village, famous for quinoa, not included in our dinner menu, and once destroyed by the Chilean’s in 1920.

After 12 hours and as the sun began to set, we made it to Hotel Tayka made entirely by stone and volcanic sand on a higher altitude. Totally disconnected from the entire world (we had no reception for 3 days, yes we survived), we were one of three guests at the hotel. After a home cooked dinner, we called it a night while whipping winds howled through the night. Contrary to a few reviews I read on Trip Advisor, we were lucky to have hot water. Although the heater was on, it was freeezing. I slept in my jacket and luckily escaped ginormous sparks of static electricity from the blanket my friends experienced when they tossed and turned. 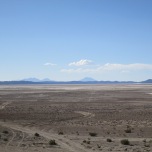 View from the Caves 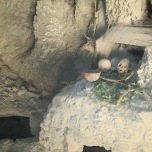 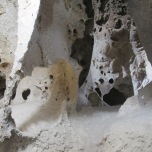