From Bucharest we zipped by empty green fields, which would have been invaded by sunflowers with their heads turned to face the sky had we visited in Spring, and headed south towards Veliko Tarnovo in Bulgaria. We drove along the bridge over the Danube, which marked the border to Bulgaria. It totally destroyed the fantasy I created in my own mind as a child listening to Strauss’s Blue Danube. Perhaps, the back door to Bulgaria wasn’t a good idea for childhood romance? In winter too?

After crossing the big metallic bridge and a couple of passport checks later, the landscape unraveled a profusion of white fluff. Unlike Romania, it was still winter here. We drove up the winding roads to Veliko Tarnovo’s historical quaint town in the valley of the Yantra river that overlooked the Assens Monument, erected in honor of four horsemen who turned Veliko Tarnovo into a center of political power. We were blown away with the view (the Assens can be seen from any view point) and instantly fell in love with the historic town that fought many wars and sometime in between became the capital of the Bulgarian empire. 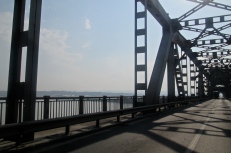 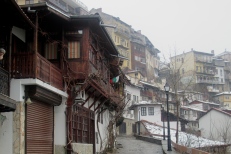 In good weather, from where we stood, we could have clearly seen Arbanasi, a village up in the mountains 6kms away. Instead, we paid a visit and popped in the Church of the Nativity of Christ and Kostantsaliev house that belonged to a wealthy merchant. The lay out of the house kinda reminded us of traditional houses back home. Arbanasi was a gift from Sultan Suleiman to his son-in law Rustom, sometime in the 1500s. Well, that explains the writing on the wall in the city center too! We were amazed at how the paintings in the church that presented various Biblical themes including topics from the Renaissance looked absolutely flawless. Standing at one of the plateaus, we could have seen the churches and fortresses dotted around Veliko, but being there on a totally off-season quest, the snow haze took over the horizon. Arabanasi, blanketed in snow, was closed for business. Intensified by excessive dog barks, we left. 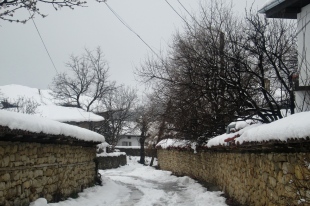 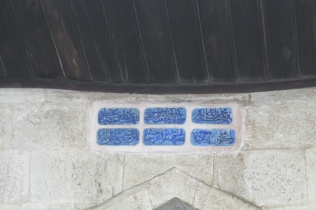 Writings on the wall

Back in Veliko, we entered the gates of the reconstructed Tsarevets Fortress, a symbol of the city, once surrounded by stone walls. The site, once a medieval city, is still under the process of more archeological excavations. When the Ottomans conquered, they burnt it down and toppled the Bulgarian Empire. We hiked to the top of the hill to check out the dramatic murals at the Patriarchal Cathedral of the Holy Ascension of God. Painted in 1985, the frescoes were extremely modern, totally nontraditional and included religious stories in addition to Bulgaria’s tragic moments in history. So amazing!

We walked up and down twisted cobblestone alleyways in the historic center, sometimes connected by staircases. Everything was so close yet so far apart. At one point, I picked up the WI-fi signal from our hotel, which was on a level much lower from where we stood. Snowy rooftops, graffiti, quiet streets sans the masses of tourists, our experience at Veliko Turnovo was infinitely better than what we expected. We all agreed that Romania was slowly starting to slip from our memories over Bulgarian dinner. Apart from ordering pizza that came with no bread and topped with mayo, we enjoyed Bulgarian cuisine. They sure love their yoghurts and Pitka Breads! 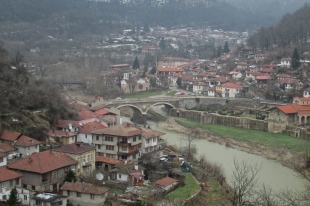 One response to “The old capital – Veliko Tarnovo, Bulgaria”