At 5pm, right before sunset, we made it to Sofia’s city center. Confronted by dull skies and light rain, we zoomed around all the famous landmarks on foot in less than an hour or at least before the sun set. Fortunately, they were concentrated in one place. Without a map, we frantically followed our tour guide and took run-of-the mill pictures to keep up.

Rich with underrated beauty, every corner exposed pieces and architectural designs from settlements that existed since it was first founded in the 7th Century by the Thracians that named it Serdica after their tribe. Then the Romans, Byzantines, Hungarians, Ottomans, Bulgarians came, conquered, destroyed and left behind remnants that are too good to miss!

So, here we go – below is a recollection of our brisk cultural tour:

We parked the car across the Royal Palace, now National Gallery and Museum designed in classic Second Empire architecture on Battenberg Square and walked down Tsar Osvoboditel street. We spotted the domes of the Russian church of St Nicholas the Miracle – Maker and walked towards the Tsar Liberator Monument. The monument, placed at the center of Sofia, was erected in honor of the Russian Emperor Alexander II who freed Bulgaria from the Ottomans.

We turned around and headed towards the most beautiful and largest Eastern Orthodox cathedrals, St Alexander Nevsky Cathedral. What a beauty! Both inside (to warm ourselves too) and out. After peeking into the Crypt Icon Museum we could hardly see through the windows because of the inapropro lighting from the sky, we walked towards the unknown Warrior Monument and stared at the facade of the Saint Sofia Church next door that looked creepy exotic. Evidently, with tombs underground, it constituted of a chronicle of events. The church was built over a couple of older temple foundations, converted into a mosque, destroyed by two earthquakes, deserted, turned into a warehouse, back into a church which is now one of the symbols of Sofia. A Middle Age antique that explains why Sofia is called Sofia.

From Moskovsa Street, we walked down an alleyway to the main boulevard, Dondukov. We came across the most bizzare hotel lobby, Hotel Arena Di Serdika. The lobby of this 5 star hotel was also home to the ruins of a Roman coliseum.  The Serdika amphitheater lay across.

We walked down the main street towards the Former Communist Party house and took a right turn. Here, we saw the Central Bath and the Banya Bashi Mosque. From the Central Sofia Market Hall, where the Synagogue of Sofia peeked from behind, we walked back alongside the Statue of Saint Sofia and the Church of St Petka of the Saddlers to Nezavisimost Street. As the sun was setting, the Presidency Building, the Council of Minister’s Building and the Former Communist Party House lit up. We ended our rush of a tour at the entrance of the Institute of Archeology and Museum and headed towards our hotel.

Sofia had left a lasting impression on us. We are visiting again! And you should too… 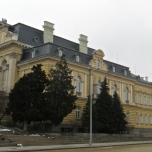 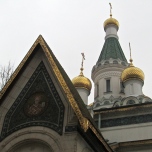 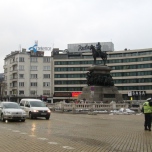 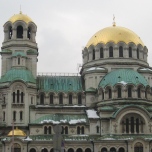 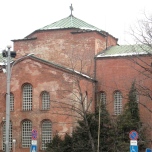 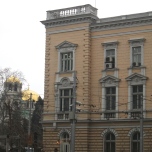 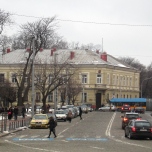 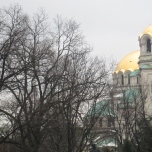 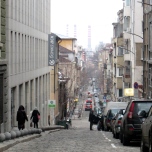 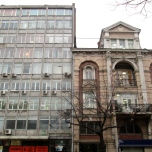 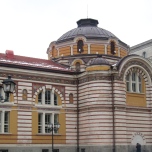 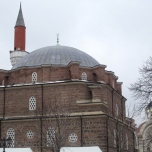 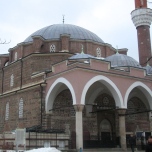 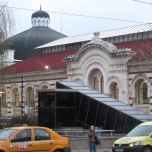 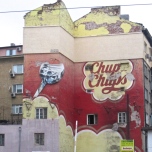 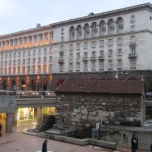 Excavations near the Presidency Building 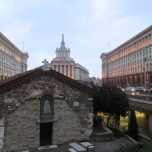 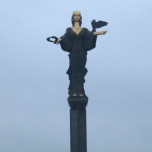 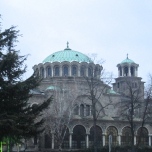 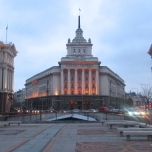 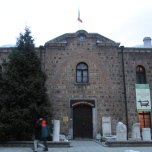 Institute of Archeology and Museum