6:45am – It was time to leave. We drank our coffee (great coffee) on Daddy Long Leg’s balcony overlooking the quiet street, people walking to and fro. It was the total opposite of what went down last night.  We put our luggage in the car, in my case, one plastic bag and zoomed out of the CBD District.

As soon as we hit the highway, I had a good feeling! The beautiful landscape revealed itself. Hanging clouds, sunshine, red earth and natural greenery defining the simplicity of the African continent. It re-affirmed why we came back to explore South Africa in more depth. It was a beautiful day and a sense of relief came over me. It was so clear, we could see the Cape of Good Hope (visited last year) on our coastal drive to Hermanus. We arrived at 10am after stopping by our guide’s house and meeting his wife, who was in charge of the logistics, kids and dogs.

Hermanus is a coastal town, known for whale watching and shark diving. We stopped at the bay for a heavy breakfast with beautiful views of Walker Bay and the Atlantic ocean. I couldn’t resist the freshly cut biltong I stuffed my face with until we reached Cape Agulhas, the lowest point of Africa and the dividing line between the Indian and Atlantic ocean. We saw a couple of shipwrecks and ton of tourists waiting in line to take photos at the marker of the dividing line. If it weren’t for the marker, you couldn’t tell by just by looking out to sea. The geological formations of the rocks on the beach were pretty darn cool. There’s a ton of earth shattering science (pun intended) behind the Agulhas such as the current, the compass – according to the one lighthouse that sits there, and the Portuguese. What’s interesting is that the rocks on the coastline are the same formations as the ones on the Table Mountain.

Still full from breakfast, we prepped for the long drive to Storms River Camp in Tsitsikamma. I called the airline to ask about my luggage, they said it arrived and was on the way to the camp, so the guide asked his wife to call the camp and tell them to expect my luggage.

The landscape transformed from rocky to luscious green rolling hills lined by pine trees. As we approached Tsitsikamma National Park, the mountain range revealed itself while the sky turned pink. We took a right turn that approached the Indian Ocean and finally made it to the Storms River Mouth Rest Camp reception area at 7pm.

Our guide came back with bad news ‘your luggage did not arrive, but they did receive a call to expect it so everything is under control’. Me: ‘Yay, Who called them?’. Guide: ‘My wife’. Me: ‘So how are things under control?’.

Clearly the airline was out of this. So I prayed they’d drop it off later in the evening.

We drove down the winding road to camp (5 mins drive) and witnessed the most beautiful sunset as we checked into our cabin. It was too dark to notice the forest. Waves crashed on the rocky formations (same ones at Table Mountain), oh my earth! At dinner, I stared out into the ocean possessed by the glowing waves ( marine bioluminescence) while a group of over 60 drunken tourists were laughing so much. It was contagious.

Back at the cabin, I fell asleep immediately, so much easier when you don’t have to change into PJs and travel with a plastic bag, as the waves crashed on the rocks all night. I still dream about it. 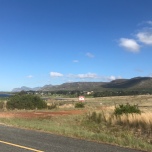 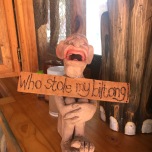 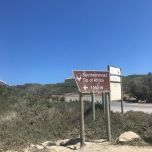 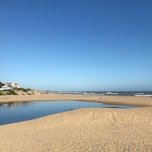