Kimberley to Pretoria via Joburg Airport

My brother was arriving today. So, we altered our route to meet him at Joberg Airport before heading to Pretoria. Simple right? You hit the main highway then turn on to the N1 towards the airport.

Before I dig into it, let’s talk about the Big hole.

After our delicious breakfast at the Kimberley Country House, where the owner/ex chef ensured each and every detail of the set up was neat, we drove to the Big Hole 10 minutes away. A massive hole excavated by hand that led to the diamond rush and the formation of De Beers. The open air museum blew our minds. We walked through an open air museum (the old town) that took us back to 1871 to retrace the history of the diamond industry exhibiting dealerships, pubs, salons, a train station and a church. Diamonds were first discovered near the Orange River in 1866 and other areas, but Kimberley triggered the big guns from EU to come out here and changed the course of South Africa’s future. After we walked around, we watched a film that told us the story of Kimberley. We walked over the open air steel platform to stare down at the hole that shimmered with a beautiful reflection the sky above. Afraid of heights? This wasn’t bad.

We rode the elevator down to the mine that recreated the real deal such as walls being bulldozed, extreme noise in the background. Just before claustrophobia hit, we entered the most polished room that exhibited the history of diamonds in its entirety, the history of South Africa vs the world and South Africa after diamonds. Did you know diamonds were first discovered in India? We walked into a totally secured vault that displayed massive diamonds, all shapes and sizes and the famous 616! We were in awe! I’m not a big diamond fan, but this experience blinged up our minds for sure. You can spend hours here.

After the museum, we drove to the McGregor Museum to meet with a guide who drove us to the Rudd House, once owned by the co-founder of De Beers, Charles Rudd, and then donated to the McGregor Museum. It’s also known as the ‘Bungalow’ originally a 4 bedroom house that later expanded into more than 20 chambers and bedrooms when his son Henry Percy Rudd moved in. There were a couple of memorabilia that belonged to Mr Rudd and family photos in the living room. Some of the furniture, flooring and walls were original. A fig tree in the garden. We were here to dive into the aspects of luxury back in the day, although we didn’t see the gold medal Percy Rudd’s son, Bevil Rudd MC, won in the 400m at the Antwerp Olympics in 1920.

We walked into the dining room, through the game room with a pool table and some taxidermy collections, into the kitchen, the nursery and some of the bedrooms. Cutlery clinking? Baby cries? I was totally oblivious to Kimberley’s ghost town reputation? The Rudd House is totally haunted with proof? Our guide brought it up a couple of days later. He said he was spooked out in the kitchen. For reals? The dining room is where all the actions happens according to some journalists who took photos there and only 2 out of 3 appeared. I hadn’t felt anything unusual. Anyway… 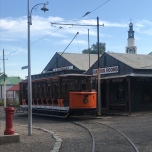 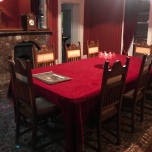 We were on the road again, stopped at a gas station for lunch, then off to ‘avoid the rush hour traffic to Joberg Airport’ to meet my brother at 4:30pm. According to the guide ‘we were on course’. As we drove on the N1, he took a left turn and drove us into a township. What’s worse, his GPS Tracker, drove us into a DEAD END…IN THE TOWNSHIP. I couldn’t believe it. You can’t afford to make a mistake here. So what if the GPS guides you to the left – that didn’t even look like it was the right way. It’s one highway..to the goddamn airport. Rain added to the misery. The skies turned grey. We finally arrived at 6:00pm, totally off course, because he underestimated the distance top. I started to question his competence. This guy was going to drive us down the Sani Pass he allegedly knew so well. So I chilled out and assumed this was an one off ‘mistake’.

We drove along flat and fertile landscapes dotted by mining settlements or farms. The scenery was pretty much the same throughout the journey until we reached Joberg and Pretoria.

After we met my brother, we headed to Pretoria. It was raining and hazard lights were in full swing. At 7pm we pulled into our ‘guest house’, Waterkloof Guest Lodge where we met with a check in disaster, because it was the wrong guest house. The guide assured us it was okay and said ‘the other guest house is 2 minutes away’. We drove in circles around a residential neighborhood, thanks to his useful GPS, once again, for 10 minutes until we spotted the guest house ourselves. Finally we pulled into the most stunning guest house! Two storey self catering houses or ground floor rooms that overlooked the pool surrounded by a lush garden and super tall trees that gave it a rustic feel. We instantly felt at home!

One response to “On the Road – Kimberley to Pretoria – Day 5”