I soaked up the green view from my balcony – the sunlight shining through the trees amidst a cool breeze coming through. There was no need to rush. After breakfast, we headed to the Cultural Village at Mantenga, a nature reserve, 5 minutes away from our lodge through shades of green, blue and beige, refreshing my love for African soil. We sat through an E-Swatini culture fest followed by a guided tour on the banks of Little Usutu River where we could see the summit of the ‘Execution Rock’. Criminals were either executed or given the option to throw themselves off the cliff like little birds – hence the name in African – Nyonyane – little bird.

As much as I’m a big skeptic about cultural activities, this one was real and entertaining.The tour started with a dancing display of Swazi culture. Each dance expressed certain rituals and folkores which drew oohs and aahs from the crowd. The dance offs were pretty cool which eventually lead to the finale – crazyass dude who shimmied uncontrollably like some kind of spell caster. Later, we were guided to the reeds that encircled a bunch of huts. It was as close as it got to every day life, akin to an open air museum. Our guide articulately explained the purpose of each hut from an economic, religious and social standpoint and why it was built a certain way using traditional materials that included poles, leather, reeds and dried cow dung. What each hut was made for, cooking process, monkey business (can you notice it in the pic?), arts and crafts and what nots.

We had the option to hike up the trail and check out the waterfalls. No thanks. We went up by car instead, took a photo and turned around. 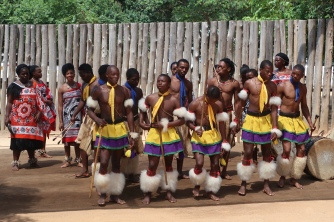 After the tour, it was clear our ‘original’ guide wanted to call it a day but we insisted on checking out Mbabane’s city center. He said there wasn’t much to see and it was risky bet (petty theft n all), but we insisted. We drove 30 minutes to the city center to pick up some local grub. He said he knew a good restaurant with local food  ‘best place with a great valley view’ a little detour before heading into the city center; in his mind avoid city center. Okay then, Ride on! As soon as we arrived, the place looked like it was closing down – for good and didn’t want to take orders. Our presence entertained a small family caring for their cattle. We walked up and down inclines for what we thought was the restaurant but it was more like non traditional food, spaghettio- for reals. At this moment, hanger pangs started kicking in.

Off to the City Center then. The roads were pretty neat, like a couple of lanes, some lined by glassy low rise buildings. It was structured in a way good photos were impractical to take through the window. We saw a neon ‘restaurant’ sign. We drove around in circles three times, traffic was slow until we finally found it tucked in an alleyway, attached to a mobile phone shop, with a white tile effect that completely lacked ambiance. Besides we couldn’t park and our guide’s concern for safety ???, so we drove back to Mantenga, 30minutes away.

We popped into a mall with a supermarket, ATM and unappetizing restaurant chain close to the crafts market nearby, another waste of 30minutes. Still hungry, we finally made it back! Already too late for the buffet lunch, we hung around and ordered a light meal. One dish though was too light for our liking. The ‘green salad’ was literally half a cucumber and tomato and two lettuce leaves. It infuriated my cousin.

As the E-Swatini housewives were enjoying their afternoon shenanigans, some total self entitled guy, loud AF, yelled at the staff because of the kitchen cut-off and exhaled tension into the air. So, off we went back to our rooms.

We spent the rest of the day relaxing on the balcony until dinner. Rude AF was sat across and continued his self-entitlement pursuit of petrifying the staff. This time it was about the wine. 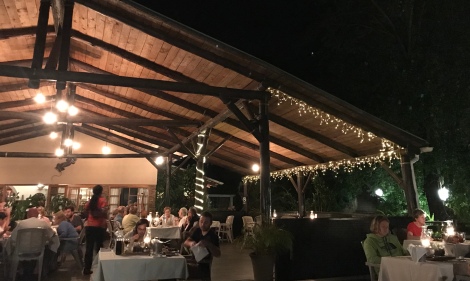 One response to “Day 9 – Swaziland/ Eswatini”