Punakha Dzong stood like a centerpiece between Ma and Po Chu Rivers. A few days ago, we passed by on the way to Gangtey, it was like looking at a photograph. I never would have imagined that it would be the highlight of my trip with the added bonus that there was hardly any people traffic.

The Dzong, or fortress monastery is the second oldest Dzong in Bhutan and was built in the 1630s. It survived fires and earthquakes annnnd continues to be an important site for ceremonies, celebrations and politics.

We walked through the temple’s “outer gate” and over a covered wooden bridge supported by wooden beams – also a resting point for pigeons which have no consideration for humans walking underneath. As a result, I ran towards the Dzong’s entrance surrounded by wild trees and drowsy dogs. We climbed a steep flight of steps made of stone and then another steep wooden one they can pull up. Two large golden prayer wheels were next to the wooden door defined by its weight to keep the enemies out. We were led into the hallway lined by floor to ceiling thangas that depicted Chinese Zodiac art forms such as the wheel of life and scriptures with prayers – I guess to keep the devil away.

The admin offices arranged around the first courtyard, also known as the Northern Dochey, were a few storeys. I was drawn to how each door and window were unique, the colorful designs on the balconies and sloped roofs supported by intricately decorated eaves and brackets. A bodhi tree in the center of the courtyard beautifully complimented the white washed color of the Utse stupa that houses a couple of national treasures brought from Tibet, not open to the public.

We then entered the second courtyard or the second dochey where the monks reside. Warm sun rays integrated into the structure and created a natural setting for photographs.

At the third and final courtyard, we entered the 100 pillar assembly hall where the history of Bhutan and beliefs in Bhuddism were intricately detailed and described on the murals. I looked around in appreciation and humbly accepted that it was crazy impossible to learn the history of everything Bhuddhist in a few short minutes, so I walked out for fresh air and more pictures.

After leaving the fortress, we walked down the path towards Po Chu river, a few red robes in sight, they were either on a break or were coming from the next village across the river connected by the historic 160m suspension bridge. After walking half way across the jelly like bridge, a bunch of young tourists were doing the jumping photos that produced immense internal fury and anxiety. I visualized being swept away by the strong current so I walked back, took a seat ‘next to the bridge’ and watched it wobble. 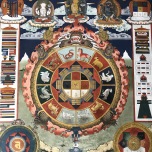 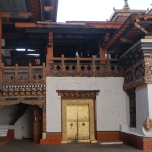 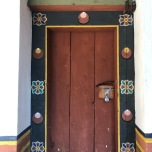 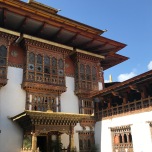 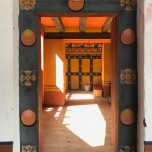 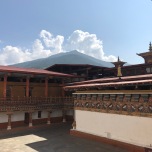 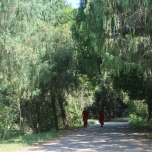 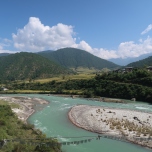 After lunch, we drove up to Ta Dzong, an ex fortress that protected Rinpung Dzong a couple of thousand years ago. It was built with stone and wood and warranted safety from neighboring countries storming in. Since the 60s, the round structure has been a National museum that displays thousands of art work, cultural artifacts, taxidermy..pretty much information overload. The interior was dim like a cave and congested with people. The wildlife section caught my attention, but I hardly picked up on info, my concentration impaired by constant chatters and people elbowing their way.

Outside the museum, the ambiance was totally harmonious. From where we stood, we basked in the view of Paro, the top of Rinpung Dzong, and villages near by that glistened under the warm blue sky, the air so pure. We also experienced an overhead view of the few pilots working their flying skills onto Paro’s notorious runway.

We headed down the hill towards Paro Bazaar and ambled around the main street. I reveled in the wooden architecture, sign boards and quirky little alleys. A few cafes served coffee and an assortment of french pastries. I wasn’t looking for a sweet taste of France so I indulged in french fries with a side of chamomile tea. We checked into the Tashi Namgay Resort and called it an early night for we were going to work the Tiger’s Nest on the ‘morrow. 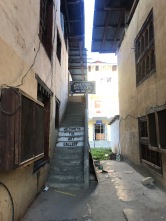 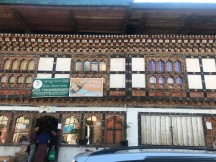 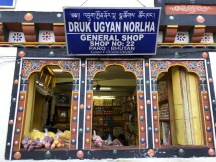 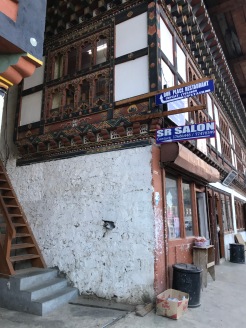