By now, I settled in to the routine. In between looking out for wildlife and stuffing our faces, we sat through presentations of nature related photograph analysis, wildlife and geology a couple of times a day, listened out for surprising animal encounters and then translated our experience and understanding into oil painting and sculpting (if we wanted to). Did anyone wanna talk about Drake’s new dance album? No. Queen? Maybe. The Beatles? Yes.

We sailed towards Hinlopen Strait to see the most exotic steep cliffs in the archipelago, Alkefjellet, also a nesting site for thousands of Brunnich’s Guillemots flying so close to us, calling out to one another Pennywise, and bomb diving into the water.

But first, we sailed out to the less feathery part of town to admire the Jurassic limestone structures sticking out 100m above the turquoise sea. A marvelous blend of deep shades of snow, rock formations and dotted vegetation. I’m no rock nerd but this was magic. Someone on our dinghy spotted a fox, tough if you didn’t have perfect vision. Surprise, he was a couple of decades younger than all of us. As for the rest, we rolled out the binos and monster camera lenses.

The fox shuffled around scavenging for some grub, if lucky, fallen chicks. I gave up, its furry white tail and thinner brownish coat blended with the terrain so I couldn’t tell where it was. Obviously, it dumped its white winter coat and tricked us with its summer look. Recurring eye floaters a la squiggly lines took over my vision so before my anxiety kicked in, we changed direction.

This time we drifted towards the nesting area, clear skies stinking with thousands of Brunnich Guillemots and Kittiwakes flying around, thousands of others were perched over the edge of the cliff, where they like to nest – every July-August at Alkefjellet. We all spotted another fox running around in circles on the shoreline – this time, it was easy to catch without squinting our eyes out. I took a couple of passable photos. 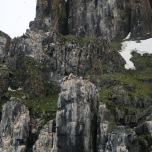 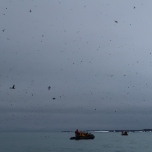 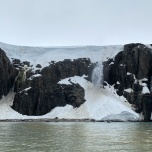 After lunch, we landed at Torellneset, south west of Nordaustlandet named after Otto Martin Torell  a curious Swedish naturalist/zoologist who researched a ton about the polar region. Between 1858 and 1861 his expeditions to the Arctic was math and surveys that gave way for other expeditions to do more math and research, in particular measure the earth’s surface near the North Pole.

We dinghy drifted around the island, an hour and a half of going back and forth under gray skies, mist all over while intermittent flocks of birds spiced up the landscape. Vegafonna Glacier was up north, an exotic contrast to the polar desert. What looked like gigantic rocks strewn over, were walruses on top of one another. The usual cuddles, snorting and what not. It was fun to watch and fall for their charming ways while our zodiac guide rambled on about the Vikings. He mentioned a book I can NOT remember, so I’ll just give the show on Netflix a crack. 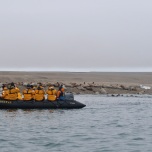 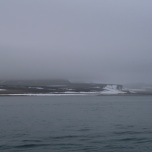