We desperately wanted out after inhaling Bagmati River’s piercing l’eau de toilette that penetrated the entire city of Deopatan and Kathmandhu. We hit the rocky road down south to Lalitpur, also known as Patan that dates back to 300BC. Patan had been recognized endlessly for its eternal beauty, elegant architecture and in my opinion better air quality. Four Ashoka Stupas stood on the city’s cardinal points. One in each corner and one in the center that formed the shape of the Buddhist “Wheel of the Law”, dharmachakra, which symbolized the dissemination of Buddhism across Nepal. As soon as we hopped off the van, Abdulla immediately bought a digital camera without a warranty.

It feels like it was only yesterday we were at Patan appreciating its sanctity and protected monuments. We stepped into the distant past, an open air exhibition with a thousand and one wooden and stone structures which included a gamut of delicate art work, from deeply carved deities, artistic steeples, monuments and wooden pagodas.

We didn’t leave without a little taste of “Nepal’s Got Talent” that attracted a big crowd of curious spectators, some of whom cringed internally as they feared for the girl’s life. While safety was hardly an issue, the daredevil balanced herself on a tightrope, flipped and double flipped to the rhythm of her dad’s singing and drum beats. Thankfully there were no injuries and we called it a day. 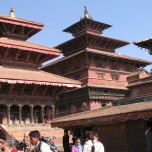 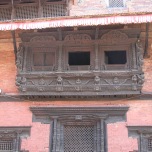