Would you rather awe at a pile of radiating half broken temples as the sun rises early in the AM or sleep in? You guessed right. We slept in. Temple hopping in one of the biggest archeological parks that spreads over 400 sq km not only demands stamina, a vehicle and an informative guidebook but the strength to keep your good virtues in control just because…at some point, you will lose it.

Keep up with the Brahmavihara. What better way to acknowledge its oldest teachings!

Although of Buddhist origin, the four virtues of Loving-Kindness, Compassion, Empathy and Equanimity are the fundamentals of human goodness regardless of what religion you follow. You think “Erm, So what?” I say, “Read on”.

Before you pack your fancy Canons or Nikons and enter the park in total confusion, educate yourself. It is an overwhelming experience, whether you stay for a day or a week. You could either wander aimlessly on a pile of sandstones, gawk at fungus a thousand years old and break a leg because you tripped over one of the thousand tourists OR embrace the sanctity of ancient monuments spread majestically around the park. Either way, and don’t say I didn’t warn you, it will bore the hell out of you, but the latter just not as fast. So, take your time and appreciate what remains of the oldest temples in Angkor built to honor various teachings, Gods, and kings.

I suggest you wake up early enough to see as much as you can after a good meal, coffee, red bull or whatever keeps you up because some sites close earlier, latest at 6PM. Plan accordingly since temples are driving distance and uh-oh NO bathrooms. Unfortunately, our inexperienced tour guide explained the obvious without specific details. “A” for HIS effort and OUR patience.

First, we entered baroque in style the city of Angkor Thom that shows off its pride, the most photographed monument in Angkor after Angkor Wat, Bayon. We pushed against hordes of tourists and street kids selling stuff on fragments of broken stone to observe towers and galleries surrounded by terraces of Lepper king and Elephants. 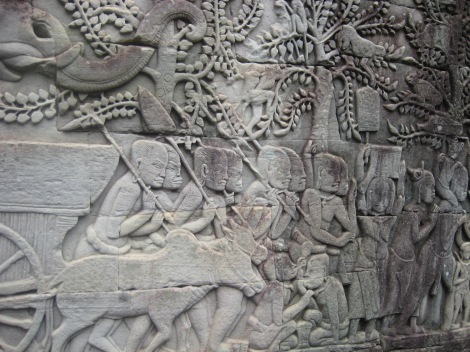 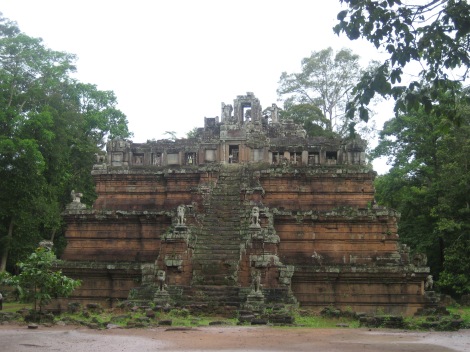 Because the temples were discovered hundreds of years later, unfortunately, they were invaded by tree trunks and attacked by fungus. More importantly, they survived secular clashes and terrible monsoon. Who would have thought nature’s disaster could turn into a form of beauty (I think so) and attract millions? Here I present Ta Prohm, a kilometer away from Angkor Thom. 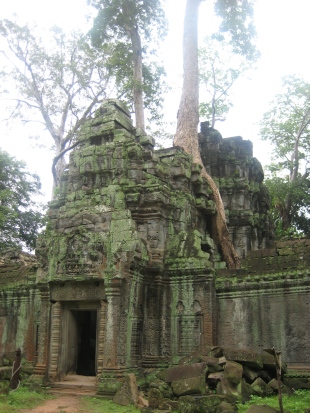 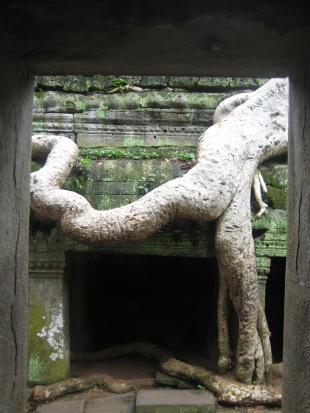 After visiting the two most monumental sites, we headed to the classical masterpiece of Khmer art, situated on a hill, with well preserved interior carvings of scenes from Indian literature in the galleries and five shrines that represented the “mythical” Mount Neru. The magnificent Angkor Wat. Our first view was a reflection of the temple on collected rain water right across, in addition to street kids yelling “One Dolla” and a couple of other tourist scams like horses and sunsets.

The unique structure and its alignment suggested it was a funerary temple and a favorite to archeologists, historians and photographers. 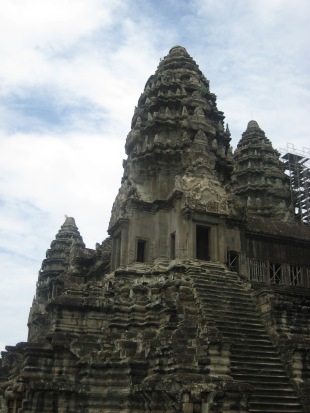 One of the 5 shrines up close