5pointz, the Institute of Higher Burning, is falling victim to real estate shenanigans; whatever capitalism. A decade worth of compelling tales of graffiti are going down with it too. The curator “Meres One”, aka Jonathan Cohen, converted the building into an outdoor exhibition space, also known as the “graffiti Mecca”. He’s doing whatever it takes to save it, but we’ll find out by the end of 2013 if he has received enough support to fight back.

Located at Hunter’s Point in Queens, you can’t miss the red and yellow former industrial complex. The building that covers an entire block exhibits a bevy of art from hip hop artists to anime to deeper messages. Predominately associated to the hip hop culture, we were nothing short of “wowed” as we looked and involuntarily fell victims to the spray paint hazard. My favorite is Jimi Hendrix. Ofcourse.

But hold on. There was more. As we walked over to the other side, not only were we awe-struck by monster size 3 dimensional graffiti and live spray painting, but a rap open mic that converged everything the building represented: Hip hop culture, graffiti and freestyle rap.

This one was far away from vandalism, as some people may associate graffiti to. Meres converted the warehouse into a landmark to spawn an outlet for creative expression. Evidently the graffiti is related to the culture of hip hop and an honor to artists who left a legacy of individualism. In my opinion, the soon to be demolished building represents a burning flame that reinforces the value of self-expression and fair opportunity. It doesn’t matter how much a painting is worth or how exclusive of a location it’s housed under. A skilled artist deserves recognition in either way. 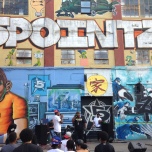 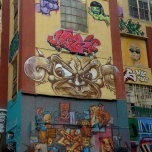 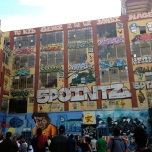 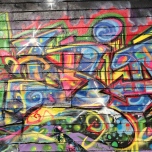 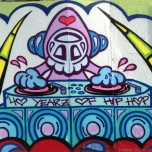 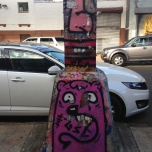 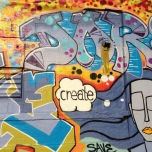 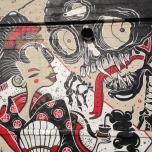