Sit back and Relax! 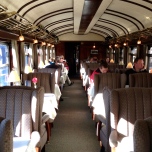 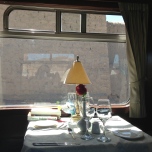 Remodeled by the same designers who designed Singapore Air’s first class cabin, the Andean Explorer 50% owned by Orient express is a dreamy 10 hour ride from Puno to Cuzco. The alternative? An attitude problem, a full bladder and omitted scenery after 6 hours on a public bus. But, before you think about it….

And how you would like to shadow the local way of life, take it easy. The experience is everywhere! Our unique “local” experience the night before in Puno was good enough to enjoy the luxurious, yet expensive, train ride and forget about the embarrassing episode Flashback AND sidetrack. We furiously walked out of a “high end” restaurant on Puno’s main pedestrian boulevard because it had been 65 minutes since our order went out and the food was nowhere to be seen. Then, I realized I forgot my purse. So..yeah. A short time later, we sparked a massive brawl with the livid restaurant manager who clung on to my purse as my unconcerned companions waited outside. Just watching.

So, the next morning we hit the train station to commence our journey to Cuzco on the second highest railway in the world. Which begs the question: “What’s the first?” Qinghai – Tibet Railway. The scenery on the aforementioned is, without wishing to sound cliche, thrilling.

First impression: Waiting room, a la cocktail reception, was packed with hundreds of non-Peruvians except for  the band. Hell, even the band played so many played out covers while people danced like it was some kind of rave. *Eye roll*

During the first leg of the journey going up north, the train cut through the heart of a market in the city of Juliaca, 40kms away from Puno. Gradually, the scenery transitioned from poor urban planning, merchants and adobe houses to isolated greenery in the agri-rich Altiplato (high plains). With crisp clean large windows and an open air observation hang out area at the rear, there was no chance missing the landscape adorned with cotton like white clouds hanging over grazing alpacas and vicunas. The sun’s reflection induced alternating hues of gold to green across the plateau. From fashion shows to a live band playing Andean instruments and traditional dancing, the last carriage was a total carnival. 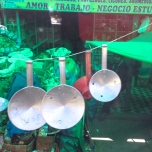 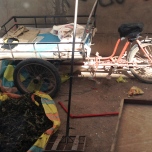 The train choo choo’d gracefully through La Raya mountain range in the Andes and stopped midway at La Raya Pass, 4,300 meters high. In between a sliver of snow-capped mountains flirting with luscious green slopes, all we had was a lonely chapel and a market as anticipated, in retrospect, cheaper than Cuzco. We petted alpacas while I hectically fetched for change because you MUST PAY, unless it spits on you. It is from La Raya where the Vilcanota River, the Great Urabamba, originates and flows all the way to the sacred valley that stretches from Cuzco to Machu Picchu, the heart of the Inca civilization. The River was deemed sacred because rich fertile soil along the river made life possible for the great Inca empire and unintentionally reshaphed Peru’s tourism industry hundreds of years later. 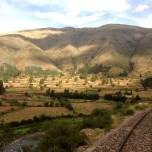