From Haciendas Los Trios, Puerto Guadal we set out to cross the border back into Argentina.

We took the longer route along the Lago General Carrerra coastline to Chile Chico, the closest town to Argentina and once covered in ash, emitted during a volcanic eruption in 1991. Surrounded by plush green hills cut by waterfalls and natural springs we crossed several bridges and commenced our climb and descents towards Chile Chico. The General Carrerra was on our left. Steep drop offs separated us from the beautiful blue lake towered by the Andes.

A while later, we were in a totally different setting . We stared down at emerald colored mountain lagoons and spotted some flamingos and lots of truck drivers heading to mine sites tens of kilometers away from the city of Chile Chico. Here, gold and other poly-metallic deposits are prevalent, though mining in the Aysen region is not a significant contributor to Chile’s commodities export. What predominantly contributes to the aforementioned is tourism. THE salty Laguna Verde, a striking tourist spot, does it right!

After lunch at Chile Chico, we crossed both borders expecting delays and what nots. It was just our day! It took us just an hour while our luggage passed unchecked. We hit Ruta 40 and zoomed off to Lago Posada, Argentina. The deeper we drove into the grande vista, the more arid the scenery became. More than that, the winds became fiercer. A couple of hours later, just before we arrived in the tiny and remote town of Lago Posada, dramatic cliff and rock formations glistened in the sun while the beautiful Lago Salitroso in the background.

Neat rows of Poplar trees, imported by European settlers to keep out the wind, appeared over the horizon. It is also a sign that a village lies in close proximity.  We checked into La Posada Del Posadas, a b&b run by Italian immigrants that settled in the tiny lake town (100 people live here) during their honeymoon in the 40s. WHY? Because they fell in love with Lago Posada. After downing Suzanna’s deliciously cooked lamb stew, we called it a night; the sound of howling winds lulled us to sleep. 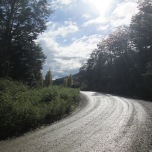 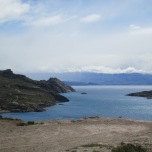 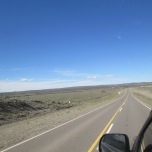 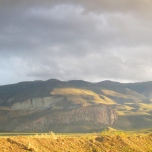