Time: 9 hours – paved/gravel as some parts of Ruta 40 were under construction (includes detour to Lago Posadas)

We left Lago Posadas early in the morning after stocking up for lunch at the only grocery store near by. It was going to be a long drive down south to El Chalten. But not before we explored Lago Posadas first. Were we going to catch the lake-love-bug and settle in the town of Hipólito Yrigoyen (Lago Posadas) just like the way Suzanna and co did? Ermmm. So, we drove off-road around the mountains with no plants but shrubs in sight. The lake that washes into the Pacific, was nestled in between cliffs and valleys designed in volcanic tuffs. Like powdered sugar, the beautiful Andes soared in the background. The beauty complemented by Lago Posadas and Lago Pueyrredón’s contrasting blue shades separated by a narrow land bridge.

We were back on Ruta 40. From this moment on and the further south we drove, snow capped Andes outlined the scenery that gradually metamorphosed from arid dry grassland to serene blue lakes and permanent glaciers. The Andean condors, with distinguished bare heads were flying free above us while rare guanacos bolted into the wilderness as we zoomed down the highway.

The village of El Chalten appeared over the horizon. At the base of Cerro Fitz Roy Mountain and other steep summits, El Chalten is tiny village that relies simply on tourism and accommodates to technically savvy hikers and climbers who want to take on the granite peaks located in Parque Nacional Los Glaciares. While Everest is conquered by hundreds during a year, only few people manage to reach Fitz Roy’s summit during the year. Hey underdog!

Upon our arrival, the sky slowly turned into hues of orangish red while the clouds finally exposed the mountain peaks. We checked into Hosteria Senderso, dined on juicy steak at an authentic parilla close by and called it a night. Oh my Juice! What’s yoooo secret?

Two lakes in one 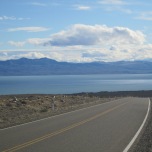 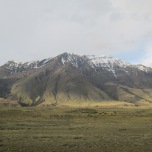 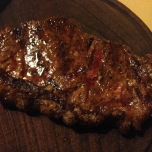