My friend and me planned this trip on the fly, bound to take it easy and relish the Mediterranean’s cool autumn weather. It was unusual for me not to carry pre-paid-meticulously-planned-out itinerary hopping from one city/country to the next. We headed towards Andalusia with basic knowledge of its magnificent history. Our run of the mill program looked like this:

In Barcelona, we spent the majority of our time exploring neighborhoods off Las Ramblas in the bizarre rainy weather, which took the locals by surprise too.

Our hotel was situated in Passeig De Garcia, Barrio El Eixample, an artistic residential area with amazing restaurants close by. On the day we arrived, it rained incessantly so we stuck around our hood and called it a night after a pleasant Japanese meal at Akashi Gallery.

The next day, we walked to La Boqueira food market, and attacked the variety of shellfish at one of the tapas bars close to the entrance (all of them recommended). Soon after, we headed towards the Gothic Quarter, and strolled along winding streets that spontaneously directed us to cafes and unique shops. A couple of hours later, we were eventually led to Arc de Triumf.

Like in every city, when it rains cats and dogs, flagging a cab is a major feat. UBER was out of the question, so we pretty much walked back to Passeig De Garcia and clocked in more than 10,000 steps. On the bright side, Barcelona is compact with beautiful architecture and ubiquitous Gothic churches. We appreciated the moment and frequently stopped by cafes to grab a bite, chill and wait for the rain to fade. It conjured up memories of when I first visited 16 years ago. It looked the same sans rain, except for the fact that back then, I was well aware of its architecture, where as now it was about finding a gym close by #fail.

A taste of La Boqueira below: 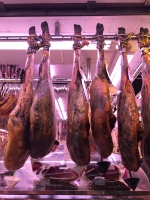