I knew nothing about Mudejar architecture until I visited Seville. I was fortunate to learn about it in a city where its beauty still flourishes even after a series of take overs, wars and disagreements too complex to digest in one visit. I picked up an informative book that touched upon the history of the Iberian Peninsula, Ornament of the World by Maria Rosa Menocal, which was a great introduction to Andalucia.

We walked to the old quarter and took a slightly different route from our hotel. Rather than going down Calle Amor De Dios to the left of our hotel, we turned right and walked along Calle Viriato. The streets were narrower, the shops more boho, and cafes dotted all around. It led us to the Metropol Parasol (La Setas de la Encarnacion) on Plaza de la Encarnacion. Constructing the wooden structure, which is now a market, was a little more complicated than expected due to the discovery of Roman and Andalusian ruins that are now on exhibit.

We did not enter the structure (perhaps next time we visit Seville), and walked around the winding streets that led the way to La Giralda, the beautiful bell tower or Minaret of the Seville Cathedral. The Seville Cathedral, previously a mosque, showed off delicate carvings of baroque art. Some parts of the mosque are still intact such as the minaret, “La Giralda”, and the Moorish entrance court. The grandness of the Cathedral took over a century to build with the intention of representing wealth and power after La Reconquista. For example, 1) the keys that were given to King Fernando after the Moors surrendered peacefully are in the church, 2) huge structures decorated in gold 3) Christopher Colombus is buried here.

The Alcazar, the Seville Cathedral and General Archives of the Indies are in the same vicinity, each a representation of Seville’s poignant power while it held the monopoly of trade with the New World, resulting in vast fortunes and the resources to continue construction projects such as parliamentary buildings, hospital, and monasteries to name a few.

In the late afternoon, we visited the Alcazar, the Royal Palace. It didn’t matter how long it took to queue. We couldn’t have asked for better weather and feasted our eyes on the elegance of the surrounding grounds. Little did we know how worthy the wait was. The inside of The Alcazar was a glimpse of life in heaven.

Beauty was everywhere. Despite the physical beauty and art in every nook and cranny of the palace and its gardens, which hands down, the most outstanding ever, it evoked another kind of beauty. Respect and integrity. The palace, originally a fort, was built by the Muslims in the 11th Century. After Seville was captured by the Christians in 1248, the buildings and gardens have been built or rebuilt on by various monarchs preserving its origins. It exemplifies how different cultures and religions co-existed with one another. It is on these grounds that plans to explore the New World was made earning Seville its status as ‘Gateway to the Indies’ during the Golden Age. 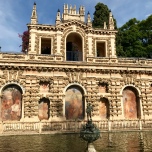 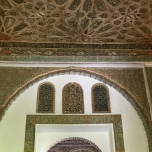