Back in the day, when we used to live in the Port Saeed Area in Deira, walking down to Dubai creek was my father’s favorite time of the day. My brother and me would tag along on our bikes and spend our mornings observing traders packing up their goods on wooden dhows. Sometimes we went fishing and sometimes he treated us to fresh juice at a traditional juice stall in one of the souks. Back then, it was raw, sources of distractions were limited.

Things began changing gradually; originating from the creek where the Clock Tower and Dhows were major landmarks and stood in contrast to low rise buildings. New sky scrappers popped up slowly while our teenage years were ahead of us.

We relocated to Jumeira and the Internet was off the ground, cue dial up. Despite the change in economic and urban pace and relocating to the other side of Dubai, dad went to the Creek, Old Fish Market and the Old Souq every Friday, sometimes with my mom.

Unwittingly, he composed a collection of the same views that evoked different stories with the passing of time. Not to mention, the evolution of camera, he took a keen interest in.

In the days leading up to the Dubai Creek Striders Half Marathon, it conjured up childhood memories and my dad’s love for it, so I hit the photo albums. As a young child, I would have never fantasized running around the ‘Dubai Creek’, let alone 21.2 kilometers.

We started the run out of the Golf and Yacht Club, I recall was so exclusive back in the day and added a green touch to the landscape. We ran out before sun rise towards Al Garhood Bridge, that doubled in size from the 90s. We ran down to the right of what used to be the first theme park ‘Wonderland’, demolished this year. We ran passed the Courts on our right and to our left was Rashid Hospital, one of the oldest public hospitals in Dubai. The sun was up by then. We zigzagged up the narrow pathway onto Al Maktoom bridge to go back to Deira and headed towards the Al Shindagha Tunnel, the first underwater road crossing built in 1975, on the creek bank lined by wooden dhows. We stumbled into a group of men doing yoga routines. The traders were on a break.

When we reached the Al Shindagha tunnel entrance, we were confronted with a steep ramp we had to run down where falling flat on your face was a probability. We ran in the tunnel and then back out into the Al Shindagha neighborhood and Port Rashid, towards the heart of Bur Dubai where the Ministry of Finance, first HSBC Branch and Cinema are based. From there we zigzagged into the old Bastakiya Souq and caught a whiff of spices, while gulls were wheeling above the creek. From the Al Bastakiya Quarter abundant in art galleries, we headed towards the Embassy Area and guest houses. We took a turn towards the Al Maktoom Bridge and ran up our final incline towards Deira and back to the Golf and Yacht Club.

Great. I hardly had time to lament and draw parallels between past and present. 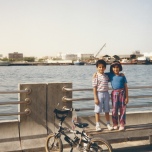 Back in 92, from the Chamber of Commerce Deira 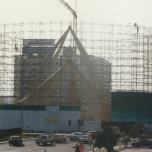 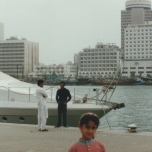 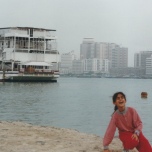 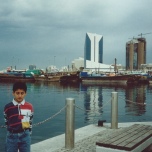 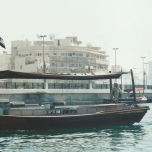 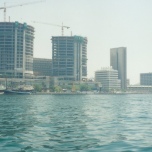 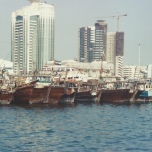 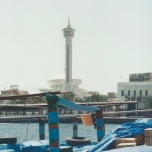