After an exciting two weeks, we were ending our journey on a quiet note at Durban, chilling at Audacia Manor, a colonial boutique hotel in Morningside a residential neighborhood. The manor was built in 1929. Fixed on a hill overlooking the Indian Ocean, we couldn’t imagine anything better. It was just like home.

From Underberg, we drove through the rolling hills of the Drakensberg (aka Dragon Mountain) passing through a variety of vegetation that glittered golden bronze under the sun. Leaving the pastoral landscape behind us, the Durban Harbor came into view. We were now entering SA’s third largest city.

As soon as we pulled into the hotel yard, we were impressed with the design of the house overlooking the rustic pool. The interior was warm and cozy, antiques all around and the bedrooms were individually designed.

As the weather grew chillier and it started to drizzle, Audacia was an awesome place to sit back on the comfy sofas and wind down. For lunch, we headed to an Indian restaurant on the promenade because the guide continuously raved about how Durban’s Indian cuisine was the best. When we walked in, the restaurant, just off the waterfront, was empty, it may have been late, is 2pm a late lunch in Durban? I don’t know, the guide was thrown off balance. This was not the Indian food we looked forward to, the disheartening atmosphere and large menu pretty much put us off. We were expecting mouthwatering blends of regional spices with Indian food. After ordering the ‘butter chicken’ dish which tasted like fruity soap, I put it aside and lost my appetite. The Biryani dish and curry my brother and cousin ordered were nothing out of the ordinary. 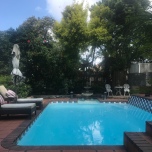 One could also argue that the ubiquity of Indian restaurants across Dubai exposes us to a variety of flavors and cooking styles, so it was disappointing because Durban has the largest concentration of Indians as a percentage of overall population outside India. We trusted our guide’s judgement  since he’s been to Durban a couple of times(Actually who knows if he’s even been – wait until the ride to the airport in the next post). We blew our only chance as we were leaving the next day. To make up for losing out on ‘the freshest biltong in SA’, he convinced us that we could find it in Durban too. I ditched the trip to the mall, but all I know is that my sibs went to a supermarket and came back with packaged biltong available everywhere. We didn’t have much of an appetite for dinner – because the lunch left a lingering taste in our mouths. Nevertheless, we walked down Innes Road had something light at a Halal diner, which appeared to be a regular spot for family reunions on a Sunday night, and called it an early night. 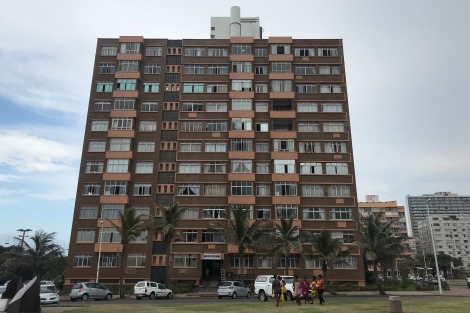