Before you ask, I didn’t do the Inca Trail trek. BUT….I waaaas engrossed in Kim Macquarie’s “The Last Days of the Incas” and digested Inca-luable information, enough to impress  tour guides with my correct answers. That good enough?”

We took off early in the A.M. from Cuzco to Ollantaytambo, a town in the sacred valley and went down in altitude from 3,400 meters to 2,700 meters to the valley that sparkled under the morning sun with traces of the Inca civilization dotted around such as terraces, fortresses and carved stone images formerly worshiped during pre-Inca times. After the Spanish conquistadors took over Cuzco in the 1500s and left their exquisite signatures all over the city, the Inca emperor Manco Inca fled to Ollantaytambo. After his cover was blown, he fled to Vitcos, burnt it down after his cover was blown again and finally settled in  Vilacamba, two days away from Vitcos. Vilacamba and Vitcos were dubbed the lost capitals of the empire.

It took the interest of an amateur archaeologist Hiram Bingham to stumble upon the abandoned ruins of Machu Picchu during an expedition in search of the lost capitals. Detailed accounts of two failed Christian missionaries who wanted to destroy Shamanism and spread Christianity in the 16th Century directed Bingham’s expedition. They were the only privileged non-Incas allowed into the fabled capital Vilacamba. But, they were eventually killed for dishonoring Inca rituals and pagan beliefs. Meanwhile, a hundred kilometers away, the Spaniards described their expeditions in diaries that unveiled classic tales of arrogance, self-pride, brutality, fear of ubiquitous spider monkeys, and greed that toppled the Inca Empire. Their diaries were also used to navigate the trails of the dense rain forest to sniff out indications of human habitation. Poor cuy (guinea pigs) eating guys. They had no clue what the heck the New World was all about.

An hour and a half later, we were at the train station to embark on another 2 hour ride aboard the Inca Rail (free snacks) from Ollantaytambo to Aguas Calientes, the gateway to Machu Picchu. To sum it up, the scenery was magical. I sat back in the comfort of my leather seat, thought about the beautiful Inca trail, time traveled to the 16th century in admiration of warriors and soldiers who crossed extremely dense forests along the Urubamba river to climb 2,400 meters up to the hidden estate built by the first emperor, Pachacuti Cusi Yupanqui, the earth shaker. We checked in our luggage as soon as we arrived and headed towards Machu Picchu after crossing a bridge and circling around a mountain with steep curves for 20 minutes. Finally, we were at the top and the lost city was still out of sight. We climbed up another few hundred meters until we were left speechless.

Lost city alright. The tourists have found you. We walked along monster size ruins that overlooked Huanya Picchu (young peak), another mountain worth hiking up to capture a non-mainstream view of Machu, among other peaks. Although we had tickets to hike up the young peak and watch the sun rise over the magnificent ruins of Pachacuti’s former estate the next morning, we steered clear of the option after endless warnings from Darwin, our tour guide, who allegedly wrote several books about the cradle of the Inca civilization. He mentioned something about venomous snakes, tripping down to death, steep inclines and drops, hand crawling… Was he joking? Because it totally freaked us out. We decided to heed his advice and hold on to our expired tickets. In retrospect, I would have still played chicken.

Temple of the sun

Temple of the sun

The Villacamba range with snow capped peaks spooked us as it towered over the Lost City. I couldn’t help but marvel at how massive stones were brought up, polished and fit together perfectly sans gaps, like a stack of Jenga bricks. The Incas believed they were descendants of the sun so they built the temple of the sun dedicated to Inti, the God of Sun. Hundreds of people gather at the observatory from all over the world to celebrate the equinox in March and September. Darwin explained the complex thoroughly as we walked along the “streets” of the Lost City, squeezed into the temple of the Condors, pointed at aqueducts and admired the luscious greenery that adorned jagged peaks underneath puffy clouds. Everything was engineered in such a way that brought the benefit of combining astrology, astronomy and religion to the ancient culture of finding inspiration from the classical elements of earth, water, fire and air. For example, at the Temple of the Condors, the Incas sacrificed themselves for good harvest and soil.

After spending the whole morning closer to the skies and a nose burn, we headed back to our hotel, Hatuchay that overlooked the Urabamba, for a little bit of RnR. Aguas Calientes is really tiny, it lies along the banks of the river with an amazing sound system and THE best Quinoa encrusted chicken at Cafe Inkaterra. Don’t just have it once. 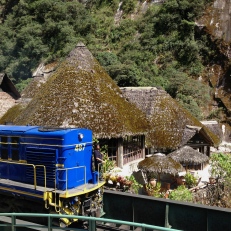