On a bright sunny morning, we set out to catch sight of one Patagonia’s three growing glaciers. It also marked the final chapter of our Patagonia road trip. From El Chalten, we took one last look at Cerro Fitz Roy and drove along Lago Viedma, formed from melting glacial ice. We first laid eyes on Viedma Glacier through binoculars before driving into El Chalten the day before. Binoculars? Not our idea of chasing glaciers! It was only a matter of less than 24 hours before we saw the supreme glory of Perito Moreno Glacier. But now, it was time to hit Ruta 40’s southernmost route that killed our patience with it’s wild beauty. The entire vicinity from El Chalten to El Calafate lies in Los Glaciers Nacional Park, a UNESCO World Heritage Site, which includes the largest ice cap outside Antarctica and Greenland.

Lago Viedma’s intrinsic blue color delicately contrasted Argentina’s southern deserted altiplano, of which journeys changed the lives of Darwin, Fitz Roy, Paul Theroux and other settlers and travelers who traveled across its bleak steppes. It also offered an escape retreat for Butch Cassidy and Sundance Kid who’s strange stories brought more mystery to the region. In addition, Patagonia boasts remnants of the last ice age as scavenging Andean Condors fly in high altitude searching for the next lonely guanaco to hunt. Driving in whipping winds through vast pastures in alternating stripes of green and yellow enriches the unforgettable journey. Sandwiched between the humid Andes influenced by the Pacific and lakes that drain into the Atlantic, the empty quarter reveals a totally different climate zone.

A few hours later, Lago Argentino appeared through the mass stretch. Fed through Lago Viedma, it is the biggest fresh water lake in Argentina. It was time to enter Patagonia’s mass tourism quarter. Chunks of glaciers floated on the lake as we drove through forests towards Perito Moreno Glacier where we encountered tourists that flew into to El Calafate or drove from Torres Del Paine National Park in Chile, to either hike on its surface, approach the ice walls on a catamaran or walk along the foot bridge area and reach balconies at different levels for a really good arm’s length view of the glacier. We did the latter and whether we were on the balcony atop or below, the view of the glacier front was just spectacular. Never mind the sun’s luminance and exotic reflection on the glacier, it was freezing. As a result of icy winds, huge blocks of ice collapsed and splashed into the lake powerfully just like a thunderous explosion. Shiverrrr.

After an hour long walking tour not taking our eyes off the glacier and awe- struck by the profoundness of nature, we were blown away. Sadly, it was time to leave. I couldn’t help but turn my head for quite a few last glances at the glacier. It marginally grew smaller and smaller as we were sped away and headed to our final destination, the most Southern we’ve ever been in the world, El Calafate, a growing town in order to accommodate more tourists. 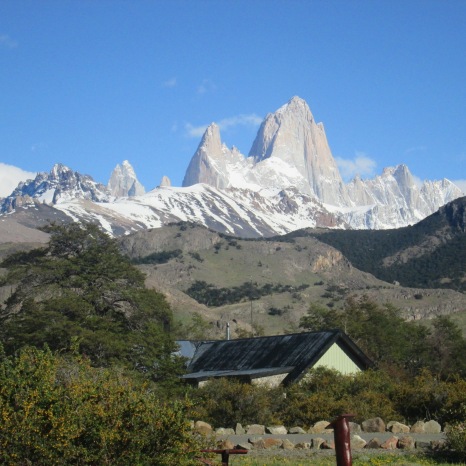 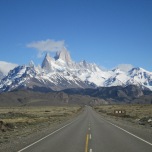 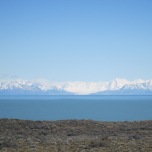 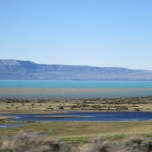 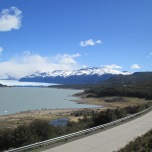 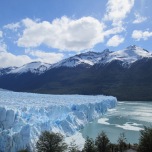 Top of the Glacier

One response to “Patagonia Diaries – Day 6 – Binging on Ice”